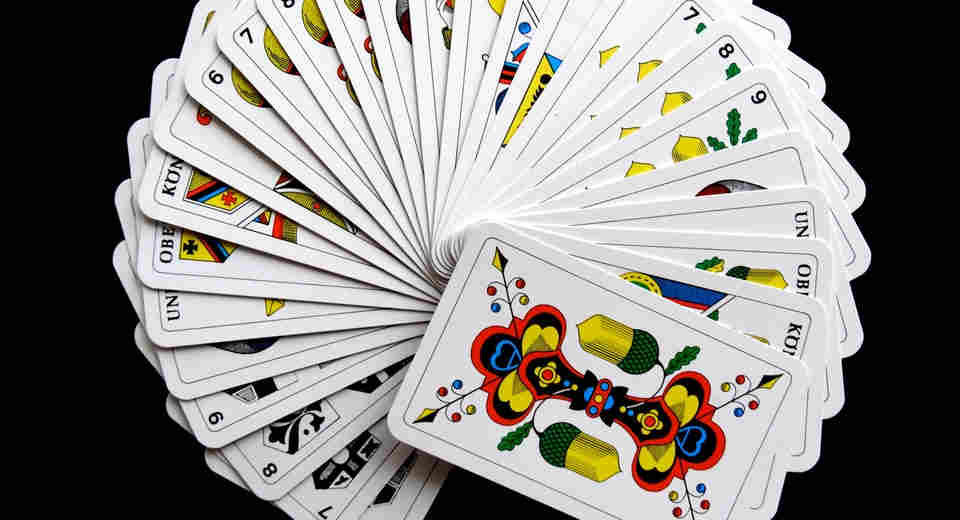 The Jass card game is the most popular in Switzerland and one of the oldest card games in Europe. Learn how to play it here!

Jass is a card game that is so popular in Switzerland that Jassen has basically become synonymous with playing cards. This also leads to some confusion, because all kinds of card games are called Jass there, including Mau-Mau.

Originally, Jass is simply a term of endearment for Kaspar, and in Alemannic this is what the jack or under in card games used to be called. The game of Jass in its earliest form was probably brought to Europe by the Saracens as early as the 14th century.

Jass spread mainly in the Alemannic language area, i.e. Switzerland, Liechtenstein, Vorarlberg (Austria), South Tyrol, southern Baden-Württemberg and Alsace. Accordingly, it is played with all packs of cards common in these regions, i.e. with French, Bavarian, Italian or Swiss-German hands. The number of cards (36) remains the same in all variants.

A colour is determined as the trump, either by blindly drawing a card or by agreeing on a certain sequence of trump colours per round.

In principle, a round of Jass is similar to other trick games such as Skat: whoever comes out plays a card. Afterwards, the person who made the trick always comes out first.

Ranks and Values of the Cards in Jass

A peculiarity of the card game Jass is that the ranking of the cards is different for the respective trump suit than for the three minor suits. In short, in the secondary suits the usual ranking applies, in which the ace counts highest, followed by king, queen, jack, 10, 9, 8, 7, 6. Within the trump suit, however, the highest card is the jack (under / jass!) and the second highest is the 9, also called the nail.

These two cards also count differently in the scoring.

Whoever takes the last trick of a round gets 5 extra points. So a pack of cards contains a total of 157 points. If a team makes all the tricks in a round (match / march through), it receives 100 extra points for this, i.e. a total of 257 points.

The Weis, Wies or Wyys

There is another way to score points in the card game Jass, namely the so-called Weis (also known regionally as Wies, Wys or Wyys). In Jass, Weis refers to special combinations of cards that the players hold in their hands at the beginning of the round.

These are either sequences of cards in one suit or 4 cards each with the same picture. See the table below.

Each player must declare a Weis when they play their first card. You only say your highest Weis, but you can have more than one Weis in your hand.

The player who announces the highest Weis must show it after the first trick. He can then also show other ways. Only this player is allowed to credit the points for his sage in this round. These can often be decisive for the game!

The values of the way differ regionally, in the following the table of the Swiss way of playing:

In the card game of Jass, the Stöck is the combination of the king and the top of the trump suit in a player’s hand. It scores 20 points for the player’s team.

The Stöck is considered independently of the Wise Men and is scored in any case. It can be entered, shown and scored at any time during the game. The latter is especially important when it comes to being the first team to “say thank you”, see the following point.

The card game Jass is played in rounds and ends at the moment when one of the playing parties “says thank you”, i.e. announces that it has reached a previously agreed score. The usual number of points is 1,000, 2,500 or even 5,000.

The game can therefore also be ended in the middle of a round! The team that has thanked you must then of course show its points. The other team also loses if they have a higher score because they failed to say thank you.

Each player should therefore constantly calculate the points in his head, especially when the game is approaching the agreed scoring target. Accordingly, it can also be strategically wise to announce a stick early on, even if this gives the opposing team an insight into the cards.

As you can see, Jass is a highly complex and exciting card game – no wonder it is so popular in Switzerland and other areas. If you are looking for a detailed insight into the countless variations and special rules of Jass, you will find it in this book:

Classic games with rules Classic card games are your thing? Do you already know Whist or the card game Cheat? On Abenteuer Freundschaft you will find classic card and dice games fully explained with rules, but also current game tips with new discoveries. On our leisure ideas portal, everything revolves around quality leisure activities and there are gift tips as well as very different ideas for activities with friends, the partner and the family.

*This article contains affiliate links. This means if someone clicks on the link and buys the product, we get a small commission for it.