The know board game is the big quiz novelty from Ravensburger. It advertises that it is always up-to-date and offers many different game modes with various knowledge games, including listening and guessing. How much news does the game bring with the Google Assistant?

“Ok Google, tell me a tongue twister!” And then hum and combine sounds to form a term next. The know board game proves that the days of Trivial Pursuit and quiz games that are purely about knowledge are actually a thing of the past. There is so much more to quizzing. It’s about guessing, identifying, being creative, being fast, communicating and, increasingly, interacting.

What exactly makes the know board game so different from all previous quizzes?.

It’s no longer just about knowledge! Entertainment, fun and funny game modes are just as much a part of the game as up-to-date knowledge questions and general knowledge. This is made possible by the Google Assistant, which does not always know everything but offers completely new possibilities for the games industry, which Ravensburger uses in the know board game?

How well does this innovative game concept actually work in execution?

For whom is it worthwhile to purchase the know board game?

You can find a compact summary of our playing experience, the pros and cons and our assessment of who this game is a must-have for in the conclusion.

Note: Ravensburger kindly provided us with a review copy of the know board game. However, this review is not agreed and unpaid and reflects our honest opinion.

The Know Board Game at a Glance

Ok Google, Tell Me Everything Important About the Know Board Game Game structure in the know board game

But to play kNOW! with digital support, all you really need is a smartphone on which you download the free Google Assistant app, install it and link it to your Google account. And, of course, the internet!

The know! board game can be played both on and offline. For the offline variant, there are maps for the different game modes. There are also game modes that can only be played offline and in which Google has nothing to say.

In the game box, there are also two manuals with the basic rules and for the individual game modes as well as an electronic buzzer, a game plan, playing cards and six playing pieces. To play, everyone still needs a pen and paper to write down their solutions.

First, put the four pieces of the game board together and place a piece for each player on the starting field. The buzzer, which you switch on at the bottom, fits exactly into the recess in the middle. Each player gets a pen and paper.

Now decide whether you want to play online or offline. If you want to play offline, i.e. without Google Assistant and smartphone, just take the quiz cards without the wifi symbol in the top centre of the box and place them on the respective fields according to their colour. If you decide to play kNOW! online, all the cards come into play and you don’t even have to read the basic rules, just say: “Ok Google, ask Professor kNOW for the basic rules!”

In the offline game, the youngest can start, online you can ask Professor kNOW and also set a timer right away to determine the duration of the game yourself.

In a clockwise direction, everyone in turn plays the quiz master, takes a card in the colour on which his or her game piece is standing, turns it over and first reads out the game mode to be played and then the specific task. If you play offline, there is an accompanying booklet in which the rules of the individual game modes are briefly explained. For the online version, you can ask Professor kNOW.

After the game, everyone moves their game piece forward the number of points they have scored and it’s the next person’s turn.

A round of the know! board game is over when the first player has reached or passed the starting field – or when the timer from Google Assistant has run out.

What Game Modes Are There? The quizmaster reads out a guessing question

Part of the game is a detailed accompanying booklet in which all 12 game modes are briefly explained. Next to the game it is always stated whether a game can be played online or offline or whether both game variants are possible. 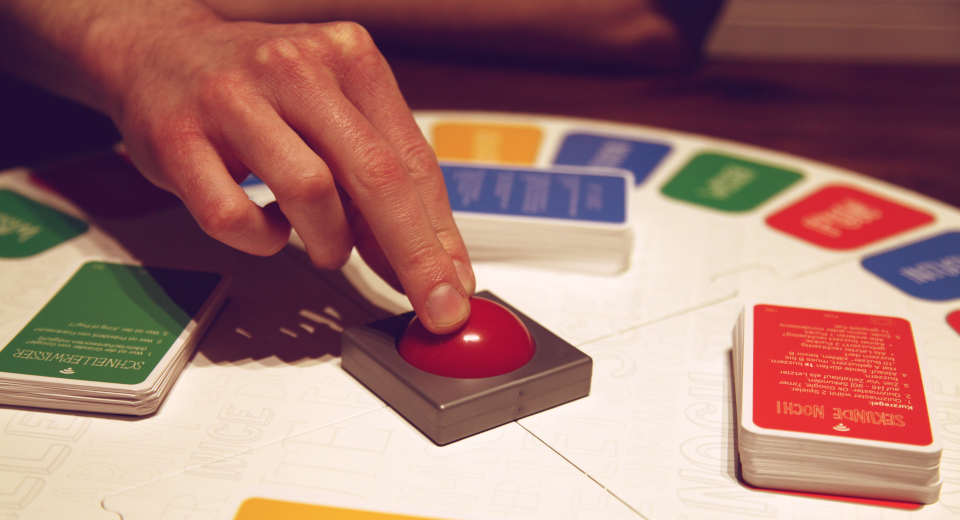 Who is the fastest and presses the buzzer?

Always up-to-date, interactive and varied: thanks to the Google Assistant, the know! board game offers many new game options in which Professor kNOW prevents cheating and provides plenty of laughs. Because the good professor is not omniscient! Or is that because it’s not so easy to formulate a question in such a way that the professor gives the desired answer? At any rate, with a strong Franconian dialect, he did not make light work of it, much to everyone’s amusement. In addition to the comfortable fact that the professor always has the rules at hand and knows lots of questions, phrases and answers, there is also an entertaining component when you play KNOW online.

In the online version, kNOW! is probably the first quiz game that is actually always up to date and yet is not a pure app, but is played like a board game with a game board and several players. You don’t have to read the rules any more either, but can have them conveniently explained to you by the professor if you wish.

As a passionate quiz player, I was incredibly excited about this innovation from Ravensburger! I was thrilled by the many different game modes – 12 variations are quite a lot and I liked the mixture of guessing, adding up, estimating, listening and knowledge, in which the person with the most knowledge does not always automatically come out on top.

When playing the online-only game modes worked differently well. We noticed, for example, that in the game Good Question, it was quite easy to ask Google for famous people or cities, but it was different with other answers that people immediately gave to the formulated question; the Google Assistant was unpredictable there. The Google Assistant often only understood half of the question and you first had to establish a level of communication with it. Players who are not online-savvy should be patient, as you first have to get used to the fact that the Google Assistant only answers and helps if you start the question with “Ok, Google”. Alexa owners and those who already use Google services will be amused by some misunderstandings. After all, experience shows that these are always part of the process.

But kNOW! also works offline, so it is also suitable for internet-less and smartphone-free evenings, because half of all game modes can be played with the quiz cards included in the game. However, “only” 1,500 quiz questions are included in the game – that’s not so much if you’re a frequent player. It remains to be seen whether Ravensburger will upgrade with question extensions for offline games.

For Whom Is the Know! Board Game Worthwhile?

The great novelty and special feature of this quiz game is that it exploits the possibilities offered by Google Assistant and integrates additional interactive game modes that would not be possible without digital support. Those who are open to digital developments and are looking for a quiz game that is modern, interactive and varied will get a lot in the big box. A nice game for the game evening, where you can arbitrarily set the playing time in advance.

The manufacturer states that the offline version is recommended from 10, the online version from 16 (this is probably due to data protection). But both the offline and online versions are designed so that general knowledge is not the decisive factor and so children and adults can play on an equal footing. The mixture of different game modes brings a lot of variety into the game and the quiz game kNOW is well suited as a family game, as long as the kids are patient with the Google Assistant.

A modern, innovative game that is much more than a mere quiz game with its 12 entertaining individual games. kNOW can be played well offline, but the big feature is the Google Assistant as the game master in the online variant, which provides topicality, entertainment and laughs with its answers and comments. Recommended game for game nights!

Fancy some more unusual quiz games? There are more free quiz games like the Famous Movies Quiz and much more board game tips and activities to discover with kids, partner and friends at Abenteuer Freundschaft!